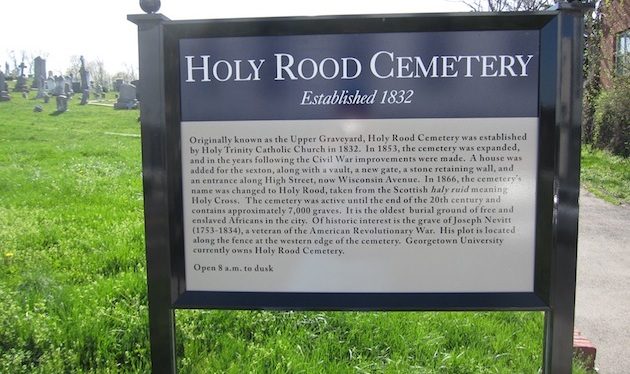 The day after Halloween is a holy day of obligation, called All Souls’ Day. The following Wednesday, the sixth and seventh grade were actually able to walk to Holy Rood Cemetery and rub names, have a service, and learn about who was buried there.

Since I am in eighth grade, I wasn’t able to go on the field trip, but I asked my sister, who is in sixth grade, some questions about her experience.

Question: What type of people were buried at the cemetery?

Answer: There we people who used to live in Georgetown and were normal people just like us. The majority of people were actually parishioners at Holy Trinity when they were alive. The people varied from different times too. Some people lived in the early 1800s and some were recently buried in the 2014.

Question: Was there anyone there religiously significant like a saint?

Answer: The teachers there didn’t say anything about saints, so I don’t think there were.

Question: What about people who were just important in history?

Answer: Yes there were a handful that I had heard about, such as Colonel Custard from the Civil War and other colonels. There was another person who was mentioned a lot. He was  a soldier in the Civil War that was going to fight where Colonel Custard was but the colonel told him to go somewhere else and that is why he survived the war.

Answer: What we did was pick a grave and put a piece of paper against the name and draw over it with crayon. I thought it was really cool because we were able to take some of the grave with us by drawing the name that was on it.

Question: Did this experience change your view on All Souls’ Day?

Answer: It did and it didn’t. I had already knew a lot of stuff about the day but the experience taught me a lot more. It helped me understand how we remember everyone who has passed even if we don’t know them.

All Souls’ Day is a very special holy day of obligation because we celebrate everyone who has died. It is very important as a Jesuit school to celebrate this holiday and learn about it through hands on experiences.